Wood and 5000 years of experience is required to build sound wooden ships.  Whitstable shipwrights worked in oak, pitch-pine and elm to build fishing boats and ships up to 450 tons.  No working shipyards, sailmakers or rope makers remain in Whitstable, but if you know where to look you will see their footprints.  Over four centuries, around 283 ships were built or repaired in the many yards which stretched along the waterfront between the harbour and the end of the golf course. 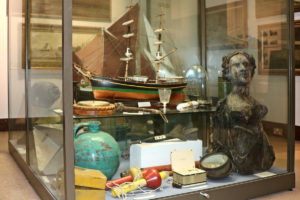 Whitstable has been a sea trading port for Canterbury for 500 years and more.  Wooden ships were repaired; initially on the open beach but shipyards soon built slipways to haul ships of up to 400 tons up to the top of the beach, where they would tower above the houses.  The coal trade with the north of England was profitable and Whitstable soon had many ship-owning families including the Andersons, Ganns, Goldfinches and Joiners.  Naturally they used local yards to build and repair their ships and they even set up their own insurance company for shipping risks.

Canada had huge forests and in Prince Edward Island ships were built for a single voyage to England to deliver timber.  Whitstable shipowners would buy these redundant ships from Liverpool, sail them round to Whitstable and replace wooden fastenings with iron to make them fully seaworthy to Lloyds requirements.  Some of these ships lasted for 40 years or more.

After wooden ships had finally been replaced by steel in the 1920s, some of the shipyards built high-quality yachts and had a fine reputation for fast racing dinghies.  During the second world war many HDMLs, MFVs and lifeboats were built for the Admiralty.  The last shipyard closed in 1985 due to the lower labour costs in third world and eastern European countries.