Acquaint yourself with Peter Cushing OBE (1913 -1994), film actor, television star and artist. He lived in the town for 35 years whilst making many of the 91 films in which he starred. His stoic portrayals in Hammer horror films and Star Wars is legendary, but did you know that he also played Dr Who in two films? 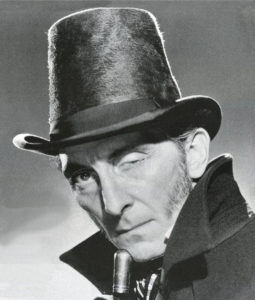 PETER CUSHING, the prolific and well-loved actor, was known in Whitstable as a courteous and unassuming gentleman. When greeting a lady, for example, he would always kiss her hand, regardless of who she was. His love of the town (which he always referred to as “the village” because of its community spirit) was, in turn, rewarded by its inhabitants. Whitstable residents allowed Peter Cushing and his wife Helen to live in relative peace by treating him as one of their own. Locals were always very protective and they would often be uncooperative about directing strangers to his home.

Many celebrities visited Peter Cushing while he lived in the area, including: Gordon Jackson, Ian Richardson, Sir John Mills, Timothy West, Rona Anderson, Ernie Wise, Paul Eddington and Alan Titchmarsh. Peter Cushing walked or cycled almost daily; he had several favourite walks in and around the town. Among them was the walk from his home in Island Wall across the golf course, either into Alexandra Road or to the benches behind Joy Lane. He also enjoyed walking along by the sea wall and the beach to the Sportsman pub and beyond.