Shrimps, Oysters, Cockles, Muscles, Whelks and Winkles together with crabs and whitefish are all part of Whitstable’s story. Oyster beds have been cultivated off Whitstable’s coast since ancient times, but in 1793 local men bought the rights to the beds and an Act of Parliament established the Company of Free Fishers and Dredgers of Whitstable. Today all kinds of seafood can be sampled in restaurants and on Whitstable Harbour. 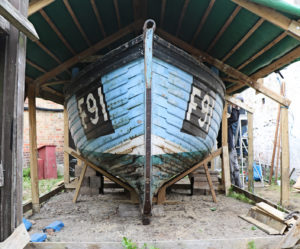 Whitstable may not have supplied oysters to Rome, but the north Kent coast was known to Roman historians as a source of good oysters.  Whitstable is on the mouth of the Swale river which mixes fresh water and nutrients with the salt water of the Thames Estuary.  The shallow waters are quickly warmed by the sun and with plenty of plankton the oyster has an ideal environment for breeding and growth.

The well-organised oyster companies farmed oysters by removing predators such as star fish (locally called five fingers) and protecting the beds from theft, particularly by the men from Essex.  In mid-Victorian times, Whitstable supplied around half the oysters eaten in London.  A particular type of fishing smack known as a Whitstable Oyster Yawl was developed over several centuries and built in Whitstable shipyards.  At one time 80 or more could be seen in the bay.  Today the oyster is grown in metal bags on trestles in the sea, but apparently they still taste good.

Whelk, cockle, shrimp and other types of fishing each require special skills and equipment.  Local whelk boat FLOREAT is being renovated and can be seen in the museum, together with model boats and different types of fishing nets.