The Invicta steam locomotive was built by George and Robert Stephenson for the World’s first steam locomotive passenger railway. The line ran from Whitstable to Canterbury and opened on the 3rd May 1830, four months before the Liverpool to Manchester line.

You will also see one of the stationary Winding Engines used pull the wagons up the steep inclines, which has recently been rescued.  Why should Whitstable be the location for such an early railway? 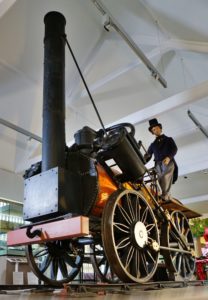 Newcomen (1712) and Watt (1770) developed stationary beam engines for pumping water from mines using the remarkable power of steam.  Trevithick (1802) used ‘high-pressure’ steam to improve engine efficiency and even built a very early locomotive.  Whitstable Museum has just rescued a stationary beam engine made by Robert Stephenson & Co, which is being restored.

When the Canterbury and Whitstable Railway was first proposed in 1824, the directors had a choice only between horses and stationary winding engines.  Locomotives did exist, but were slow and so heavy that they frequently broke the early cast iron rails.  Two locomotives on the Stockton to Darlington railway exploded, which was not ideal for passenger safety.

In 1830 the Canterbury & Whitstable Railway opened, the world’s first to use a locomotive to pull a regular passenger service.  The locomotive INVICTA was part of Stephenson’s brilliant new design breakthrough with relatively light, high speed engines.  People could now travel faster by train than on horseback for the first time in history!  Engineering innovations included wrought iron rails, a fire-tube boiler and the steam dome.  The industrial revolution had arrived in Kent!