After a huge fire in 1866 the Norwich Union insurance company, striving to protect its policy holders and its own financial position, presented Whitstable with its own Horse Drawn Fire Pump. This pump was used to fight the Great Fire of Whitstable of 1869 which destroyed 70 buildings.  The bright-red restored manual pump is an impressive exhibit. 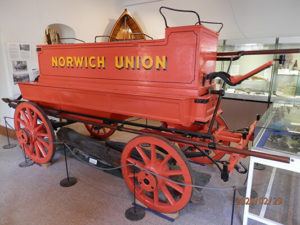 After huge fires in 1822 and 1866, plus numerous small fires, the Norwich Union donated a manual Fire Engine to Whitstable. It had to be housed and manned locally and in August 1867, the Whitstable Volunteer Fire Brigade was formed. The pump was stored in the new fire station building in the High Street and the horses were provided by the Bear and Key inn (now Prezzo).

When a fire was discovered someone would run or cycle to the fire station and a maroon rocket would be set off to call the men.  With thirteen men operating the handles at each side, the pump generated about 13 horsepower which was enough to send a jet of water to the highest building (only three stories!).

The problem of course was finding sufficient water, but in those days most houses had a pond in a meadow behind where animals were kept, or the sea could be used if the tide was in.