Between 1825 and 1830 brothers Charles and John Dean developed the world’s first diving helmet. By 1836 they had dived on the Mary Rose and raised several cannon and baulks of timber. Some Whitstable divers became rich salvaging silver dollars from a wreck off the Irish coast, others died when equipment failed or from the ‘bends’. 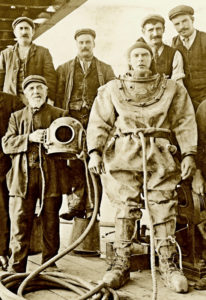 In 1823 Charles Deane patented a smoke helmet that enabled the rescue of people from burning buildings.  Charles and John Deane converted it to a diving helmet around 1827.  By 1829, working with the Whitstable salvage crews, they had raised a cargo of copper tiles from the Carn Brea Castle, wrecked off the Isle of Wight on its way to India.

With a substantial reward based on the £100,000 value of the copper, the Deanes developed their diving helmet, which was manufactured by Augustus Siebe.  Charles Mackintosh had just patented his waterproof Indian rubber material, which was ideal for diving dresses, replacing leather which rapidly deteriorated in sea water.

Helped by John Gann, William Edwards, and James and William Bell of Herne Bay, salvage dives were carried out on large naval ships including Mary Rose both to raise valuable items such as cannon and to disperse dangerous wrecks.

John Gann built a row of cottages in Whitstable called ‘Dollar Row’ with the proceeds of a seasons diving in Ireland in 1836.  The slightly larger cottage developed into the Divers Arms, the headquarters of the Whitstable divers.

Whitstable divers were world famous for over a hundred years until larger ports took over after WW1.